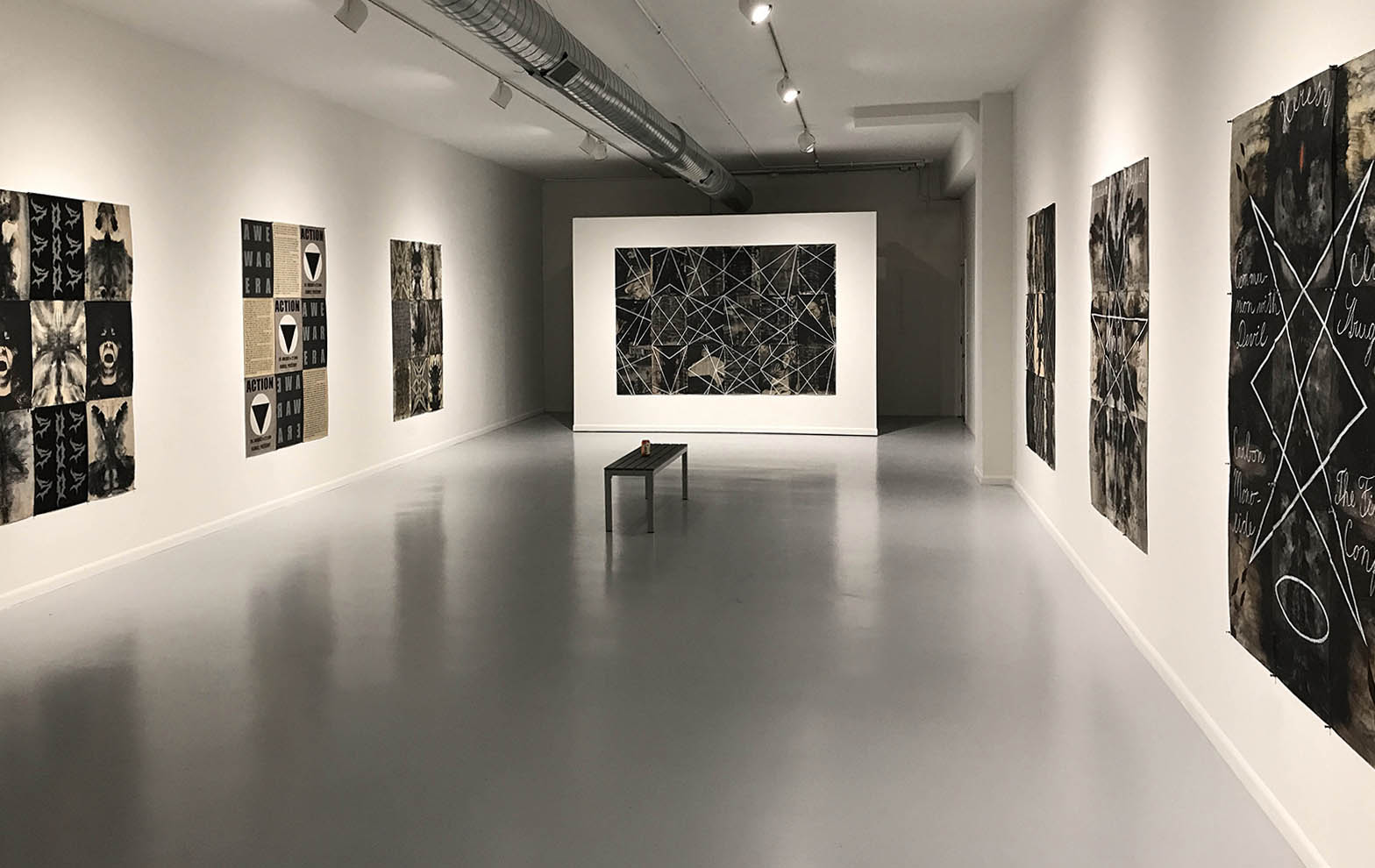 Often when there’s text in artwork, the artist intends the words in the pictures to be read. The viewer is meant to string together words and phrases, to locate the artist’s messages, jokes, puns and lessons that are communicating something more literal and verbal than a picture alone might do. However, for Stano Grezdo, texts are not what they appear to be. Grezdo relishes the forms and the shapes of alphabets, and he readily exploits the ambiguousness of words out of context. Throughout his works, the text is both a vehicle for crucial content and a compositional element that leads one far away from a singular conclusion.

In works like 6S6I6N, stenciled, spray-painted band posters are interspersed with hand-altered Xeroxes of infamous figures. Within a single, multi-panel piece, Grezdo combines the symbols and aesthetics of metal music, totalitarianism, and orthodox religion in a commingling of marketing material and propaganda. Each of these elements of the composition –the swastikas, the harsh three-letter words, Richard Nixon– are imbued with notions of falsehood, deception and even pure evil. The references and likenesses are blatant and unmistakable, and the artist’s over-the-top application of these makes a viewer wonder whether the intention is to communicate something absurd or sinister. Is this some punk band’s attempt at a bad-ass image, or something very true about our own dark history?

In ACTION, Grezdo pushes the dichotomy of meaning and meaninglessness to the max. Full pages clearly appropriated from much larger texts bear words and phrases that are the stuff of old European manifestos: “social product,” “labor power,” “heresy,” “pathological desire.” And with these pages, the piece’s title is emblazoned above an ambiguous date and time, and a nameless “banka” in the Slovakian town of Piešťany. Grezdo has borrowed all the visual and textual cues for political calls to action, but no means of determining the ideology at work or the means through which one can partake. In ACTION, whether Grezdo has presented us with words from Marx or Mein Kampf, it matters not. Rather, a viewer is confronted with the unsettling fact that the dictators and the people’s advocates, the righteous and the evil, and even the nonconformist artists of the underground, all share a language that has been crafted to persuade the public.

While Grezdo does articulate a point about the history of visual and textual language, the true emphasis of his work is far less didactic. And, the fragmented, blotted pigment composition of Organized Disturbance of the Peace I. provides an important clue as to what the artist intends the viewer to take away. At first glance, one sees a pretty terrifying figure with an elongated alien head, and indistinct limbs or outsized mothman wings. Look more carefully, and one can see that each of the nine posters that compose the piece are the product of a Rorschach-like process of symmetrical blots produced by folding paint inside the halves of the paper. The “monster” we see was created by elements of pure chance; it is our own minds that chose to turn these accidental forms into something we fear. In the presence of these works we can see that the infamous texts, the loaded palettes, fonts and symbols Grezdo also uses are just like these inkblots: mere forms to which man’s imaginations have assigned so much implication.